RAVACHOL IS BACK!!! (SMASHING THAT CRAP CALLED ART) 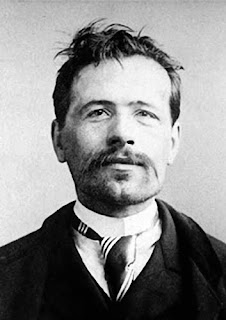 A modern art opposed to the bourgeoisie one? The actual question is not if the art in general has got or not anything to say or express. We have always taken for granted that dissidents and rebels will always attempt to make the oppression visible to everyone in order to attack subjugation along with the mechanisms that perpetuate the present filthy system as well as to experiment with any sort of directly-democratic power or means of self-expression.

The choice of employing different plastic techniques whether with this purpose or not will rely on either a question of strategy or the kind of answers demanded by the needs of every specific moment. The very real problem is that of Art itself and its existing institutions have created a brand new religion (museums, the concept “work of art” and “artist” among others for example) with its corresponding priests bishops and temples (critics, “cultural” managers, event organisers, galleries, etc…). The naked truth is that nowadays general mainstream, the so called “public opinion” really likes modern art which is highly conservative and self-satisfied. Its proposals do not revolutionize anything at all but quite the opposite. That is why Art tries to hide this, its own reality, behind the appearance of the “experimental art”. The so-called “alternative art”, even under its non-commercial and minority aspects is not brave, nobody within their most enthusiastic supporters and “artists” take any risk. The most of modern art is controlled and supported nowadays by big corporations and forms part of the wrongly called “free world” and its mainstraim culture.

Of course, we absolutely reject the art and the culture if it does not play any important part in the process of deeply and radically destroying and changing this crap of world. We will not accept even a partial victory because we aim something superior, far higher objectives, a new sensitivity which will have nothing to do with harmless performances.

Poems painted in every wall, cities entirely ablaze, people expressing their desires openly and in a radical way along the streets, black flags hanging in each government building, Westminster turned into a massive crater…
Our aims are the real carrying out of ART, the social revolution, the terror…
While some of them keep struggling to impose a Neo-Dadaist fashion trend or (as some of them name it) “revitalization”, we will always prefer to be somewhere else, laying in wait for all of you in the shadows, preparing a successful ambush… hand in hand with RAVACHOL who was a second-rate songwriter of revolutionary anthems, but a wonderful poet with a broad experience handling explosives, a complete master in the use of dynamite.

The game is over.

Don’t look for anything in the broken sack of modern art.

“Shut up!! You do not understand a thing!! This is not about your poems!!!”

(La Felguera collective)
Posted by theory and action: words for an anarchist debate at 18:37