NO STATE SOLUTION IN GAZA (By Manchester Anarchist Federation) 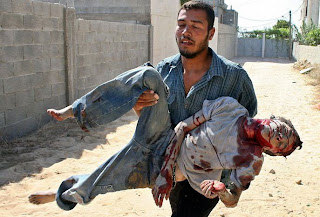 No state solution in Gaza

Statement produced by the Manchester (UK) Anarchist Federation branch on the conflict in Gaza, in solidarity with the victims of the conflict, and for internationalism.

One thing is absolutely clear about the current situation in Gaza: the Israeli state is committing atrocities which must end immediately. With hundreds dead and thousands wounded, it has become increasingly clear that the aim of the military operation, which has been in the planning stages since the signing of the original ceasefire in June, is to break Hamas completely. The attack follows the crippling blockade throughout the supposed ‘ceasefire’, which has destroyed the livelihoods of Gazans, ruined the civilian infrastructure and created a humanitarian disaster which anyone with an ounce of humanity would seek an end to.

But that’s not all there is to say about the situation. On both sides of the conflict, the idea that opposing Israel has to mean supporting Hamas and its ‘resistance’ movement is worryingly common. We totally reject this argument. Just like any other set of rulers, Hamas, like all the other major Palestinian factions, are happy and willing to sacrifice ordinary Palestinians to increase their power. This isn’t some vague theoretical point – for a period recently most deaths in Gaza were a result of fighting between Hamas and Fatah. The ‘choices’ offered to ordinary Palestinian people are between Islamist gangsters (Hamas, Islamic Jihad) or nationalist gangsters (Fatah, Al-Aqsa Martyrs brigades). These groups have shown their willingness to attack working class attempts to improve their living conditions, seizing union offices, kidnapping prominent trade unionists, and breaking strikes. One spectacular example is the attack on Palestine Workers Radio by Al-Aqsa Martyrs Brigades, for “stoking internal conflicts”. Clearly, a “free Palestine” under the control of any of these groups would be nothing of the sort.

As anarchists, we are internationalists, opposing the idea that the rulers and ruled within a nation have any interests in common. Therefore, anarchists reject Palestinian nationalism just as we reject Israeli nationalism (Zionism). Ethnicity does not grant “rights” to lands, which require the state to enforce them. People, on the other hand, have a right to having their human needs met, and should be able to live where they choose, freely.

Therefore, against the divisions and false choices set up by nationalism, we fully support the ordinary inhabitants of Gaza and Israel against state warfare – not because of their nationality, ethnicity, or religion, but simply because they’re real living, feeling, thinking, suffering, struggling human beings. And this support has to mean total hostility to all those who would oppress and exploit them –the Israeli state and the Western governments and corporations that supply it with weapons, but also any other capitalist factions who seek to use ordinary working-class Palestinians as pawns in their power struggles. The only real solution is one which is collective, based on the fact that as a class, globally, we ultimately have nothing but our ability to work for others, and everything to gain in ending this system – capitalism – and the states and wars it needs .

That this seems like a “difficult” solution does not stop it from being the right one. Any “solution” that means endless cycles of conflict, which is what nationalism represents, is no solution at all. And if that is the case, the fact that it is “easier” is irrelevant. There are sectors of Palestinian society which are not dominated by the would-be rulers – protests organised by village committees in the West Bank for instance. These deserve our support. As do those in Israel who refuse to fight, and who resist the war. But not the groups who call on Palestinians to be slaughtered on their behalf by one of the most advanced armies in the world, and who wilfully attack civilians on the other side of the border.

Neither one stare nor two states, but no states

Whoever dies, Hamas and the Israeli state win
Posted by theory and action: words for an anarchist debate at 17:42