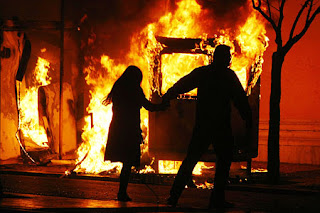 During the last two months, the strategy of counterinsurgency developed by the greek state since December has passed to a new phase of totalisation. If we speak of counterinsurgency and not of repression it is because the former in contrast to the latter is not so much a military type intervention, as an integrated political and social technology producing consent, fear and defeatism. It aims not at the immediate annihilation of the insurgents, but at the removal of their living space: the conceptual, affective and cultural plane of the insurgency. This is a preventive strategy whose object is the wealth of possibilities that sprouted out of the insurrectionary event. It is a low intensity warfare, a politico-psychological warfare, in the sense that its goal is the corrosion of the political, social and psychological consistency of the insurgency. The basic principle of counterinsurgency is, on the one hand, to “win hearts and minds”, and, on the other hand, “not to take the fish out of the sea, but to dry the sea where the insurgents swim like fish”. And it does this by “separating and uniting”. Separating the insurgents from their possibilities, separating the insurgents from their political and social affinities, separating the insurgents from each other. And at the same time uniting social discontent with the call of reform, by representing the insurgency as a cause of backwardness, and uniting the forces of repression with wide segments of the population, by presenting the former in as both humane, pro-people and effective.

A first orientation of the counterinsurgency is the separation of the uncontrollable segment of the insurgents from the advantageous ground of their action. A process that spreads from Exarcheia, the university asylum and the axis of Patision avenue, till the area around Omonoia square and the axis of Acharnon avenue1. Exarcheia are perceived as a hypertopical metropolitan centre where the uncontrollable segments of youth gather – the anarchists and the leftists and all those who if not producing violent attacks are surely not annoyed by them. And it is precisely on that terrain -of sympathy or toleration- that the apparatus of counterinsurgency is mobilised. An initial three-day police occupation of the area in October demonstrated the military superiority of the state, carrying with it the assurance that it is but a slice of the force that can be activated. Ever since, the smallest incident ignites a totally unbalanced invasion, whose main scope is not the arrest of the perpetrators but a kind of mass and collective revenge on whoever might be moving in the area at the time. This is a strategy of psychological warfare aiming at the dissolution of toleration/sympathy, putting in motion processes of (self)containment on the bases of a reversed calculation of the relation between incident and its consequences. For it is certain that an “internal” discontent is much more likely to minimize if not stop the often attacks in the wider area than the fear of repression.

At the same time, the dominant discourse on the university asylum is moving from a reading of it as a base of attacks, to its characterisation as a space of anomie in itself that has to be reconquered by the state and the academic community. In other words, the university asylum is being constructed as a ground that has to be reoccupied in its entirety, uninterruptedly and continuously – not as an institution that produces isolated phenomena that need to be contained. The problem thus is placed with endurance not the moment, with the permanent situation and not with specific states of exception.

The psychological operations on Exarcheia and the university asylum2 were preceded by a cleansing operation of the wider metropolitan centre, articulated in terms of population management on the miserable but also massified immigrants. The criminalisation of their gatherings and the biopolitical problematisation of their co-habitation in hygienic terms (as in the case of the Efeteio squat3) initially removed the most uncontrollable subject of the insurgency from the spatial centre of political and economic procedures. Then, it tried to subjectivate, under a social-democratic umbrella, its partial segments, through the political assimilation of immigrants via the promise of legalising their children, giving them the right to vote in local elections, allowing them to build a mosque in Athens and even asking for their assistance in police departments4. This is a method of counterinsurgency par excellence centred on the dissolution of the ground that gives birth to the terms of collectivisation, and on the imaginary re-unification of the segmented subject within the contours of democratic-statist recuperation.

On a second level, the counterinsurgency is trying to separate the general discontent from the insurgency as a dynamic and as a possibility, and to unite it with reform. The invention of an aim for the insurgents, and its unification with a systemic restructuring, leaves the insurgents without an object and renders any further action on their part out of place and pointless in the eyes of others. The imposition of dominant answers to questions posed by power itself in the first place is already half the work of the counterinsurgency. Part of this strategy is, for example, the meeting of the minister of education with a group of pupils. The dominant interpretation saw the explosion of violence as a result of a lack of democracy in schools and proposed to solve this problem with a “new social contract” between the pupils, the teachers and the ministry. The same spirit emanates the initiative by the ministry of public order to create “bureaus of confronting incidents of arbitrariness”5. A central tactic of every strategy of counterinsurgency, this enclosure of wide-spread discontent, which has been diagnosed by the state as a cause of December, is under the direction of social-democracy; a technology of power that not only promises the pacification of social and economic antitheses, but portrays the insurgency as cause of backwardness, as the source of delaying the exit from the tunnel.

A basic role in this injunction to peace and normality is relegated to the institutional left, the heart and mind of which has been with the state several decades now. Through the erection of a moralistic problematisation of revolutionary violence, the left is taking up its role -social reproduction- by condemning “violence wherever it might be coming from” as a basic catalyst of an imaginary backwardness towards authoritarianism. Every violence, says the left, is in essence “a violence for violence”, a “hooded right-wing” that must be isolated either with condemnations or even with marches like the one sponsored by POSDEP (the union of academics)6. This tactic of equal distance from the extremes was expressed by the state in the simultaneous warrant against the three wanted anarchists and the perpetrators of the attack against K. Kouneva7. This injunction to give oneself up to the value system of the state, not as a system of subjection to law and order but as a system of dialogue, negotiation and compromise, is separating widespread social discontent from what it can really do, and subjectivates it as a series of demands of inclusion to the bog of the Capital-relation.

Counterinsurgency is ideally a war with not a single real battle. A war of isolation, of drying out, of cutting away, which wins by mobilising the most conservative instincts of society while recuperating social discontent and protest in a context of pacification and reform.

Finally, the counterinsurgency campaign is aiming to corrode the internal consistency and unity of the insurgency, promoting a series of separations that start with the fragmentation of the insurgents into categories (social, political, psychoanalytic etc.) and finish with separating them from their very lived experience.

On the one hand, the insurgent are injucted to abandon the fluidity of December that destabilised all identities and to return to their post: the pupil must become a pupil, the anarchist an anarchist, the immigrant an immigrant, the junkie a junkie etc. The gates of the different worlds that met on the streets of December and acted together in the common negative work of destruction proving in practice that the phenomenally impossible subversion of social categories is feasible must forever close.

On the other hand, a central tactic on this scheme is the moralistic narrative of the ministry of public order regarding “children and instructors”, “hooligans and politicos”, “rioters and ideologists”. An essential part of this tactic is the injunction of a segment of the insurgents to separate itself or to bring the rest back to reason, based on some moral code approved by the state; on a “fair play” that guarantees the inclusion of social/class antagonism in a curve of normality surveyed and controlled not by the bureau of protecting the polity, but by the insurgents themselves. This self-disciplining of the insurgents against any deterritorialisation of their practice, this asceticism of patience and hope, has been a pivotal technology of subjectivation of the most successful apparatus of normalisation of the last century: the left.

At the same time, the criminalisation of certain choices and practices is a classic tactic of depoliticisation, rendering their agents easy pray to repression. Yet a necessary condition for this is their isolation from a wider political-social milieu with which they are linked. This recipe was tested with success during the summer of 2002 via the lobotomy plan of social memory which enjoyed the complete cooperation of the left8. The secret and not-so-secret warrants for “terrorist activity” today9 aim at the enclosure of a wider uncontrollable and radical population. They aim, on the one hand, to force everyone into a self-examination in order to discover any causes for his or her possible incrimination, and on the other hand, to cause quietism and relief to those who feel there is no way they can be linked since they belong to an unofficially recognised political factor, the one of “ideologues” or “serious people”. The ministry is thus creating a morbid atmosphere of confession, suspicion, fear and even indifference: “Am I perhaps suspected?” “With what evidence could they arrest me?” “Might I be involved in someway or with someone in a manner unknown to me that can get me in trouble?”. Or else: “There is no way they are referring to us, the bell is tolling for those who have no principles”, etc. This mass, and at the same time molecular, paranoia, as a product par excellence of a secret police governmentality, has as its aim to separate the subject from his/her very lived experience, from her/his being-in-the-world: to force it to think like the state, in other words just like those piles of copses, the zombie army of patriots, the organic matter of the Party of Order, think and speak – to bring about the sacrifice of the possibility of the now of insurrectionary becoming to the certainty of the completion/ payment of the debt towards the eternal being of the state.