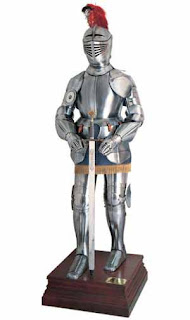 Documents, like the one called either
“Shieldbook” or “Bodyhammer”, have
been making the rounds for a few
years now. Drawing inspiration from
such attempts at increasing the
capabilities of the average street
protester, we have invested time,
energy, and very little money in
developing a set of armor that is
easily reproducible while partially
effective at protecting the peaceful
protester from the violence of the
police. By following the method
described below, even one person
with minimal access to tools and
workspace can complete a usable set
of armor or three in an afternoon's
work.
Much of the original inspiration for
this project came from pages 16 & 17
of “Shieldbook,” as noted above. The
current design is the result of more
than a year of experimental
prototypes, with testing in both the
laboratory and the field. We are
confident that the wearer will be
against several vulnerable parts of
the body, while retaining almost full
mobility and agility. Additionally, the
armor can be worn rather well under a
long-sleeved, hooded sweatshirt.
Testing has NOT been conducted
determining resistance to highervelocity,
piercing-type weapons, such
as the barbs of a Taser, but we're sure
you're better off with the armor than
without it.
Our design covers the chest, upper to
mid abdomen, much of the collarbone
region, the shoulders, and the spine
down to the lumbar region. It is
roughly the equivalent of a
combination of a cuirass (chest/torso)
and pair of spaulders (shoulder pads)
from medieval European plate armor.
Anyone employing our armor is
strongly advised to use it in
conjunction with an athletic cup (“jock
strap”), a suitable helmet (discussed
at length in “Shieldbook”), and
gloves. Leg and arm protection, for
which we as of yet have no designs,
will also prove useful.

The key component in our system is
the common five- or six- gallon plastic
bucket. These can commonly be
found stacked neatly behind
restaurants or in a dumpster as
garbage. They are often used to ship
soy sauce, pickles and sauerkraut
among other things – target your
supply missions according to local
availability. Try to avoid using buckets
with residues of toxic chemicals.
These buckets are also useful as
garden planters, components of a
greywater system, or 1001 other
handy-dandy around-the-house-uses,
so you should stock up whenever
possible. You want #2 plastic, also
called High-Density Polyethylene or
HDPE. HDPE is a highly durable,
chemical resistant plastic often used
to make containers, with a melting
point of 230° Fahrenheit.
To bind our bucket bits together, some
kind of cordage is necessary. We like
bike tube cut into strips roughly 1” X
10”, because of its elasticity,
hardiness and dumpsterability, but
parachute cord, webbing, or sturdy
thin rope will probably work also.
Make sure you test in your lab before
you try it in the streets!
Some sort of undo-able and
adjustable strap will make it much
easier to take on or off the armor, as
well as adjust it to your particular
body shape. This could be webbing
with either plastic buckles or
adjustment rings, like the sort on an
old backpack or bike helmet, or some
sort of laces that can be tied either in
front or on the side. Be inventive and
use whatever you have laying around,
or whatever you like best.
Finally, you may want extra padding
to the inside surfaces or the armor,
such as foam, corrugated cardboard,
or fabric, to increase comfort, add
more protection, or as insulation in
cold weather. Spray adhesive and
closed-cell sleeping pads have been
recommended.
As far as tools go, the absolute bare
minimum you need is a hacksaw
blade (metal cutting, $1-3 most
places) and a decent knife to cut your
cordage and drill holes with. If you
can get a hacksaw frame, it'll come in
handy. Better yet, get a power drill, a
reciprocating saw/sawzall, and some
sort of bench vise or sawhorse with
clamps to hold things steady for you.
If you have access to a nicer
workshop, dust off that drill press and
band saw or scroll saw. Optimally,
you'll have a fully equipped HDPE
molding and casting facility, in which
case, hook us up already, OK? We're
not kidding – some SCA reenactors
make really nice full-body stuff based
on actual period designs – check out
the websites at the end of this zine.

While one person can do this all by
themselves, having two or four people
working at once will make it go a lot
faster. There's 10 steps in these
directions, so it's possible to set up an
assembly line in your garage and get
a whole bunch of these built in only a
couple of days.

Begin by removing the metal handle
from the bucket. Save the plastic
handle part for making shields.

Saw off the bottom 'floor' of the
bucket. Take care not to remove any
more material than you need to, as
that will mean less surface area
protected later.

Saw off the 'lip' on both sides of the
disc-shaped bucket bottom. The lip
will make it harder to bend and shape
the plastic later, and if you get hit
there, it will gouge you extra hard.

Cut the bottom in half, so that you
have two semi-circular shapes. Set
these aside.

Make one straight cut from the top of
the bucket cylinder to the bottom.
Make another vertical cut most of the
way around on the other side (make
the cuts roughly 3/8 and 5/8 apart
from each other). You don't need to
be too exact here, but keep in mind
that the more exactly in half you cut
the bucket the SMALLER the chest
plate will be. Which ever piece is
bigger, set it aside. This will be the
FRONT. (HINT: To cut a bunch of
buckets at once try stacking them and
running a sawzall from top to bottom.)

See those raised ridges that ringed
the top of the bucket? Cut those off
of the BACK plate. Set it aside, we'll
use it to reinforce the front later.

Trace and cut the 'arm holes' out of
the FRONT plate.
cuirass spaulder
Save the parts you cut out, they're
going to be your spaulders, covering
your shoulders.

Preheat an oven to 300 degrees
Fahrenheit. Heat the front, back, and
one of the semicircles until they are
soft and bendable. Using oven mitts,
try to flatten the curve of the back
plate so it fits your back, change the
curve of the front plate so it fits your
torso, and the semicircle so it
matches the curve of the front plate.
Be careful and don't let things melt.
You might need to heat and shape the
reinforcing strip (the ridges) too.

Drill holes in the following locations:

Take your cordage and string it all
together. Working from the bottom of
the front up to the shoulders and
down the back, tie the molded
semicircle to the bottom of the
cuirass, then secure the reinforcing
strip to the front of the plate. Tie the
spaulders to the top of the cuirass,
rounded edges facing forwards, pointy
ends out, then tie the other end to the
back plate (make sure you leave a
few inches of slack in the spaulder
ties). Finally, secure the flat
semicircle to the bottom of the back
plate.
Drill a few more holes in the sides
where the front and back plates are
near each other, string through your
straps, and you're done!

This project is a work in progress. Our
prototypes are certain to evolve as we
receive more field testing data and
user reviews. We are distributing this
information not only to show people
how to copy our work, but hopefully
to encourage others to do their own
tinkering and improve on our designs.
We particularly need help in solving
the 'Boob Problem,' as it's much more
difficult to built armor for people
whose chests are not flat.
We feel this work is important... if
every peaceful protester who found
themselves in potentially dangerous
situations was equipped with this
simple-to-build armor, not only would
they be able to stay in the field
longer, but they would have a
psychological advantage over an
unarmored protester due to increased
confidence of avoiding injury.
Remember – the cops are only as
effective as their training and
equipment. The same goes for us.
We need every force multiplier we can
get.

The full document in pdf version including diagrams and specific instructions can be downloaded here:

http://zinelibrary.info/diy-armor-how-make-impact-resistant-basic-body-armor-commonly-found-waste-materials
Posted by theory and action: words for an anarchist debate at 09:50