“The most horrid scenario would be for us to be saved” (or, when I hear the words ‘national unity’ I reach for my gas mask) 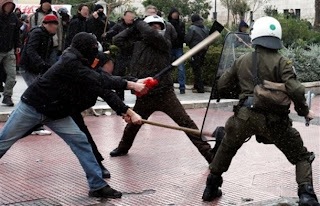 at last, hold off that emergency signal
end the siren’s hysterical cries
let off the steering wheel.
The most horrid ship-wreck would be our own rescue!”

Poem by Kostas Ouranis, as used in a recent statement by the Initiative for self-organising in education

…and some scattered thoughts inspired by the same statemen

But today, they tell us, the nation is once again in trouble. To that shameless unanimity of the talking heads, in parliament and through our tv sets, we can only respond if we find each other; in the workplace, on the street. This is not a social experiment that they’re rolling out for the first time. By now, we should know. It is a tried-and-tested solution, a wonderful calmative for social unrest. By now we know. When they say “austerity plan”, we hear a tear gas cannister explode. When they show us the deficit figures we see protests banned, the hanging threat of unemployment; fascist dogs howling around migrant scapegoats. By now we know. When they say “national unity”, we hear “social war”.
Posted by theory and action: words for an anarchist debate at 15:27