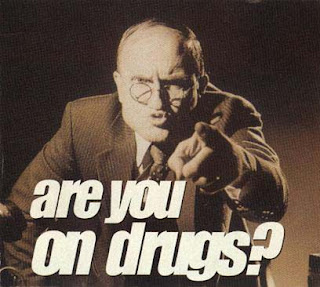 1 .- Drugs do not liberate you. Drugs can just amuse you, help you to lose your inhibitions, cheer you up, depress you, give you distension, relax… but they cannot free you from absolutely anything.

2 .- The market swallowed up the product called drug, making a commodity like any other out of it. This is demonstrated by its inclusion within the logic of profit, currently expressed by the law of supply and demand.

The drug market, whether the legal or the illegal ones, is managed through advertising, money, alienated labour, merchandise, etc..

Although still illegal, drugs manifest themselves as an instrument of social control intended primarily (and not only) to the less favoured and most oppressed social classes within the system, which is to say as a weapon of capitalism useful at times to criminalize and other times to sedate and alienate a given segment of population.

This way, expecting the legalization of drugs by the state is an absurdity from the very same moment that a large part of the drugs are defined among other characteristics as illegal being this illegality inherent to their very same essence as well as the cause of a great deal of their effectiveness.


Its appeasing function is revealed under these conditions due to the fact that the State, always above its own legal system can corruptly play with the laws applying them when and to whom it estimates more convenient.


Equating in all cases the culture of illegality to the counterculture of rebellion is a gruesome mistake, in the same way as doing the same with respect to legality.


4 .- The hierarchy in the power of the effect of different drugs is reflected by the hierarchy between the different social classes, also diversified after the neoliberal restructuring of capitalism.

Thus, alcohol, pharmacological drugs and tobacco are “prescribed” to all social sectors, going down in the social ladder as the effect of the drug increases until we get to those types of drugs such as heroin or crack for instance, which are promoted mainly among the most marginalised and impoverished social strata.
This relationship between social status and the effect of the drug is shown in this way as an inversely proportional relation.

Which is equally reflected in the structure of the social territory-space, where they set the different areas of cities in terms of marginality, being drugs a major cause of this urban layout.

5 .- The social relationship that is established in the act of buying and selling drugs is the same as that set with other commodities, i.e. a relationship of power in which some have the power to manufacture and market them at the expense of the alienated labour of many, and some just have the power of consuming them under the influence of a range of different social conditionings.


While this relationship is not eliminated, drugs can never be treated as one among other possible personal choices.

There are therefore two levels to address this issue: That of the pleasure and pain of the individual and that of its economic and social effects and each of these two approaches is composed of different factors. Social and political movements must take into account all the levels and factors before taking any side.


The actual question is not one of total affirmation or denial of drug use, but a whole continuum of items that require different approaches and analyses.


This is true because, for example, marijuana is not the same as heroin and neither addiction is the same as fun.

7 .- Puritanism, sanctimony and total abstinence are equally distorted reflections of behaviours fostered by the capitalist society embedded within the social and political movements. Sometimes, the reaction against a negative fact breeds behaviours and attitudes equally obsolete.

The vilification/demonization of drugs shares the same fate as their glorification.
.

Neither of these standpoints entails a real(istic) and comprehensive analysis, but just a part of it, i.e. they focus only in one part of the whole.


The same lack of understanding about other issues demonstrate that the subject of drugs poses no exception to the general situation of theoretical insufficiency within the movement.

The individual commitment in no longer using drugs is perfectly respectable, however always advocating for this position and stopping just there does not facilitate the creation of a collective response but quite the opposite, it hinders it.


It is not drugs what should be abolished but drug addiction along with the misery that it creates, its market, and so on.

8 .-Drugs, as such, are neither part of the solution nor part of the problem. They are just what they are, no more nor less, and this in despite of the fact they have been denaturised by the influence of the present social conditions.

Their effects on the body of different people differ greatly from the social effects they generate. In a society with different social relations no solution to any so-called “problem” would be needed precisely because the abolition of drugs as a commodity and as an element of illegality would turn them into an instrument of pleasure rather than evasion or enhancement of work performance.


9 .- At a more concrete level, we understand that drugs are part of the economical self-management of social movements (mainly through the sale of alcohol at parties and concerts).

However we also need to assume the insufficiency of such movements when they fail in finding another form of fundraising.

We do not deem this way of getting money as something negative in itself but our own dependence on this procedure and its exclusivity which is to say the practical absence of alternative means to get funding for our projects.

It has become dramatically necessary from this point of view,
to find new ways of self-management.

Miguel Garrido
Posted by theory and action: words for an anarchist debate at 09:03