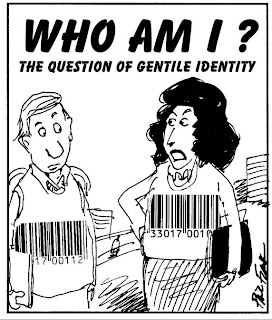 This text is not a critical study of the theses exposed in the book The coming insurrection, nor is it an attempt at a ‘theoretical dismantling’ of the same. The first idea that came to me was to do this, and no doubt I am not the only one. Many things in this book could in fact be questioned. But very quickly I had a feeling that such an approach would be useless. This feeling, this intuition rather, was that of the impossibility of dialogue with this book, or of a dialogue always broken at a given point. I had the discouraging feeling that this text could not be criticised: it seemed that other things were at stake, that it was not something one can talk about, not a simple divergence of points of view, that what was central in the text was not what was was being affirmed, but the affirmation itself.

Identity and its properties
It is not necessary to define identity in order to know it, any more than it is necessary to define a cat to know what a cat is.
An individual can have a tic, it’s an individual; a thousand individuals that have tics, that can be a custom or an epidemic; a thousand individuals who defend a tic, that’s an identity.
An identity, that is what a group provides by allowing each individual that involves themself in it to actively define themselves through it. For the individual it is a demarche of active subjection that allows him to claim this identity. In return, the identity confers on the individual the benefit of a subjective reinforcement. The most simple benefit is to be able to say: ‘I am’, and above all ‘I am not’ this or that.
An identity distinguishes itself by contiguites, borders, confines. There is Us and the others, who define themselves in relation to Us.
Identity wants to be reperible. Hence the gestures, customs, words and their direct utility: assure the visibility, the tranchant of identity. From this point of view it is quite evident thatb the masks are not there to hide the face, but to show an identity.
An identity, that resolves nothing, but it has an answer to everything. In front of any problem, all contradiction, all mise en danger, it reacts spontaneously, its only aims being its safeguarding and its reinforcement. How distinguish oneself, trancher, how reconstituer around it the scenographic order of son monde: it answers that with the promptness of a vital reflex.
The scenographic order of its world: no identity rests on one simple vision of the world, but on the active mise en scene of the latter.the world is actively built, like a recit, within which identity plays an eminent or tragic role. Identity detests the superfluous, the indeterminate, whatever prevents from judging or taking a position. Identity likes order. ‘Put order in the commonplaces of the times’.
For the individual that it inhabits, identity always needs to be built. Something always escapes perfect identification of the individual: there are always failles, always reinforcements to create. Identity is always a quest for identity.
Identity occulte the enemy sitot as it makes it appear. Because it makes it appear according to its sceongraphic needs, it parvient a le designer, but not to know it. It en polit aussitot the contradictory and superfluous asperites. The enemy, like everything else, is but a pretext for its own confirmation. Identity, in this as elsewhere, selects.
Identity, finding in itself everything that it needs, does not feel its own limits: in this it is similar to the alcoholic or the junkie, minus the geule de bois and the ... An identity, it’s the permanent ivresse of Me.
Posted by theory and action: words for an anarchist debate at 17:35