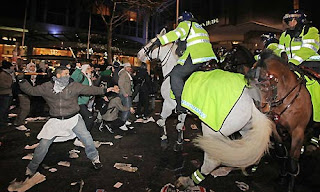 Welfare state was not established due to philanthropic reasons but as a powerful weapon against people's freedom and real social justice. It was created to dismantle the old worker's movement and its practice of self-management, autonomy and open struggle against the state and capitalism.

Welfare state changes nothing substantial in our lives, quite the opposite. Its real function is to make our daily exploitation more bearable and to humanise the state, making it look like a sort of “saviour of the poor” rather than what it is in reality, the absolute enemy of freedom, real human community and life.

In practical terms welfare state is designed to keep us all well tied to the chain of wage slavery, providing monetary “assistance” to the unemployed in exchange for their absolute submission. This creates a lot of social stigma towards those in the dole who are treated like rubbish in job centres and other institutions in a regular basis and have to accept undignifying and fascistic policing.

Welfare state has turned all of us into lazy, ignorant and degenerated individuals, totally unfit to carry out any struggle and organise ourselves. Entire generations, from grandparents to grandsons have grown accustomed to live out of the pittance they receive from the state, losing any tradition of self-organisation and anti-state, anti-capitalist fight. Here we are all responsible for our own negligence, not just “the system”.

Welfare state has allowed the left to grow to a huge extent. Social workers, NGO's, charity organisations, trade unions, left political parties, dubious “independent groups”... all of them work together to keep our lives and this shitty society unchanged. They are the first enemy, before even the cops, politicians, bankers and the military. They pretend to be in our side only to keep us under control and appoint themselves as our “representatives” in the negotiation table. These eternal reformists will always refuse to understand that a few legislative reforms can never make any real difference in our shitty lives. They must be attacked and done away with in the very first place.

Through welfare state the state, capitalism and representative demo-fascism manage to justify themselves as the “less bad” of all the political and economical systems on offer now a days. The reality is quite the opposite for what is called democracy is nothing but the most sophisticated and subtle dictatorial system human race has ever known. In this dictatorship the necessity of brute force as a means of repression has been reduced to a minimum thanks to the efficiency of mass media 24/7 brain-washing (along with other measures of “social engineering”) to turn people into policemen and policewoman of themselves (and the others) as well as collaborators with the elites who actually run this regime.

There will not be any return to the Welfare state simply because it is expensive to maintain, it generates a massive bureaucracy and so the states have to keep borrowing money from international banking institutions to keep it going. Besides we all know that wage labour is most of the time something every sane person should try to avoid at all costs. Such a realisation normally results in the huge rate of “benefit theft” and petty fraud involving the lowest social classes concomitant to every version of state and capitalist system that tries to display the “humanised” “charity”, Fabian appearance in its “public relations” with the workers and the poor.

A few months ago everyone hated Gordon Brown, Tony Blair and the Labour Party. Now everybody hates the Liberal-Tory coalition... what is going on here?, are too many MTV video-clips actually affecting our short/mid term memory?. what is the alternative after this then?, voting the SWP or any other into rule?... this would be utterly ridiculous of course for the problem is not in who is in office in a given moment but in the whole fucking system from top to bottom. In this thing that some call democracy the real, factual power figures (the army, the financial elites, the high profile civil servants) are not, (they just cannot be) elected by any of us and those who actually are do nothing but being the puppets of the former. Eventually the real power of this “democracy” falls in the weapons of the army even if this had to act against its “own people”, that is the truth about those who are so keenly regarded as “heroes” by the media propaganda.

Having seen all this we can just conclude the following:

THE REAL SOLUTION: SELF MANAGEMENT AND LIBERATED ZONES IN EVERY NEIGHBOURHOOD, COORDINATED NETWORKS OF LOCAL ASSEMBLIES OPEN TO EVERYONE AS DECISSION MAKING ORGANS, DO NOT DELEGATE POWER IN ANYONE, ALL THE POWER TO THE ASSEMBLIES/COUNCILS, IF DELEGATES ARE NEEDED LET THEM BE,TEMPORAL, ROTATIVE AND RECALLABLE AT EVERY MOMENT. FORMATION OF ARMED LOCAL MILITIA IN EVERY VILLAGE, BOROUGH AND TOWN, ORGANISATION OF FOOD SUPPLIES AND BASIC SERVICES (HEALTH ETC) BY LOCAL COLLECTIVES.

WE DON'T WANT THEIR FUCKING JOBS!!!

WE DON'T WANT TO BUY MORE OF THEIR SHIT!!

WE SPIT ON THEIR “CHARITY”!!


(One among many other street gangs with an analysis)
Posted by theory and action: words for an anarchist debate at 17:49