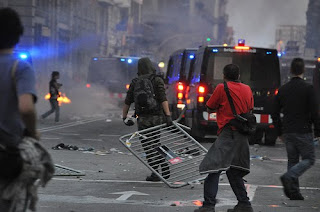 Last 29th of September 2010 we were thousands. Youngsters and adults, students, workers and unemployed, migrants and “locals”, meeting up in the street, empowering the picketers, facing the cops, attacking the symbols of Capital, of misery and luxury… Making our rage to be respected.
Now, the same ones who generated this rage, the same ones who organise our daily anxiety, those who produce unemployment and labour exploitation, those who fill up the neighborhoods with raids and police abuse, those who military occupy other countries, torture and deport, are pointing on us and accusing ourselves of being “violent”.
But we answer to this saying: “THE MOST VIOLENT ACT WAS GOING BACK TO NORMALITY”. It wasn’t the police attacks, nor the burning barricades, nor the shop lootings, nor the squatting of the bank… The hardest, most traumatic thing, was having to be back to the routinary submission after one day of revolt. Because for one day we stop putting our heads down in front of their abuse, we got united and demonstrated that together WE CAN, that if we move with strenght, the world they’ve built on our backs starts trembling.
For one whole day we tasted the flavor of rebellion… AND NOW WE WANT MORE.
Poster found on the walls of Barcelona few days after the riots
Reasons for a General Strike
In the last three years unemployment in Spain reached historical numbers: according to the last official report from January 2011, there are already 4.696.600 unemployed (20,33% of the working population) and 1.328.000 homes where none of the active members of the family has a job. Institutional studies calculate an estimated “relative poverty” rate of 20,8% of the total population, meaning an oversaturation of all charity and social help systems.
Since the start of this new capitalist crisis in 2008, the spread of precarious working and living conditions, the increasing of prices from basic goods and services, the generalised political corruption scandals, the massive evictions of defaulted families (200.000 homes in two years) and the police repression against political and social movements has grown as never before in the history of Spanish “democracy”.
When the so-called “socialist” Spanish government approved a new labour reform, aimed to destroy workers’ rights while empowering employers’ liberty to exterminate job places even more, finally the two main countrywide unions (the ass-licking sell-outs of CCOO and UGT) decided to react calling for a General Strike on the 29th of September. That was, for the singularity of the event, the perfect day for all the exploited and opressed sectors of society to show their unrest in their own way.

From the Assemblea de Barcelona to the Moviment del 25-S
The 29th of June of 2010, two weeks after the labour reform was presented, the Assemblea de Barcelona was born in a citywide open meeting for all social and alternative movements in an attempt to create a resistance tool to answer the social cuts imposed by the government. Composed by neighborhood associations, grass-root unions, workers’ comittees and individuals meeting up in public squares and giving voice to many different people, collectives and political ideas, one of the outcomes of the Assemblea was the call for a pre-Strike warming up demonstration in the center of Barcelona on the 25th of September.
Today at 20h the old headquarters from the Banco Español de Crédito have been liberated as a way of stating that the strike of the 29th of September has to be the start of a continued fight cycle aimed to stop with the abuses we are suffering from banks, government and the unions CCOO and UGT. The banner hanged on the facade makes it very clear: banks suffocate us, employers exploit us, politicians lie to us and CCOO and UGT sell us out.
Excerpt of the first press release of the Moviment del 25-S (25-09-10)
Around 2.000 people marched in this demonstration, declared illegal by the police, and participated in the squatting of the building of the Spanish Bank of Credit during a very carefully planified action that took authorities by surprise. Empty for more than five years and located in Plaça Catalunya, the main economical and touristic core of the city, the Banco de(s)crédito opened its doors to diverse cultural and political activities for five days. What was called the Moviment del 25-S managed to concentrate lots of different people, bringing back hope to the social struggles and creating a big expectation for the coming General Strike of the 29-S.
This is an invitation to fight together, wild and social STRIKE
This is not crisis, it’s called Capitalism
Banner and graffiti on the facade of the squatted bank
29-S: La vaga general
We’ve seen a huge cloud of black smoke [...] I tell you, a city out of control today, in hands of vandals [...] They are throwing rocks on us and calling me fascist... [end of transmission]
Live report in the center of Barcelona from Intereconomía tv channel journalist (29.09.10, 19.59h)


29-S support group
Posted by theory and action: words for an anarchist debate at 18:21