A SITUATIONIST UPRISING IN LONDON (by Dave and Stu) 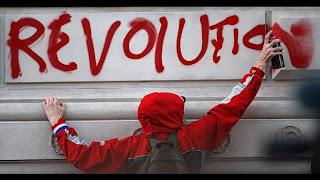 WOW!
Slogans from a violent central London demonstration on December
9th, 2010 plus a note on a slogan by Patrick Cheval
The violent, inspiring ‘student’ demo in central London on December 9th 2010 was the most
imaginative demonstration we have ever been on including the annus mirabalis of 1968.
The Trotskyist left were very much pushed aside, even the clued-in but all too reductive
ultra-left hardly made a mark, as what was blatantly uppermost everywhere both in a
genial, friendly but vandalistically spirited atmosphere and in many a homemade, stuck
together, often gloriously-penned, cardboard placard was a kind of open-ended situationist
influenced communality; an individual collectivity you knew was just right because it felt
right. There was also a fair amount of spray-canned slogans on the base of the statues in
Parliament Square: Things like: ‘Demand the Impossible ‘ (very 1968) and ‘First Greece then
Paris now London in Insurrection’ followed by ‘ I wish I could say beautiful things but I can’t’ -
when they just had and hauntingly!
As for the placards consider the following: ‘Employed and Appalled’, ‘You can have my brain
when you take it from my cold dead hands’, ‘The University is a Factory: Strike, Occupation’, ‘I
wish my boyfriend was as dirty as the police’, ‘An arts for arts sake strike’, ‘Let them eat credit’,
‘Save money eat the poor’, ‘Apathy is Dead’, ‘I am Julien Assanage’, ‘Smile you are now on a
database’, ‘Don’t make us pay for what the W(B)ankers did’, ‘Fees rise / Class divide’ etc. Some
too were obviously quite sophisticated extensions around and about the fall out of modern art: ‘This
is not a placard’ (surely a running commentary on surrealist Rene Magritte’s, ‘This is not a pipe’
painting of a pipe?) and ‘This is not a good SIGN’ (surely a Duchampian commentary – and better
than the old geezer himself - on the aridity of post modernism?). And then there was something very
topical: a BBC ‘current affairs’ intellectual had just got caught out on with a spoonerism calling Tory
minister, Jeremy Hunt “Jeremy Cunt” thus putting every born again early 1070s feminist’s back-up.
What a windfall with placards saying ‘Fuck Fees. Stop the Cu*ts’, ‘Tories put the ‘n’ in cuts’,
‘Clegg/Cameron Cu*ts’ etc. And not forgetting the splendid posse of Muslim 15 year old gals (Brick
Lane Pakistanis?) wearing hijabs holding up a placard saying ‘Class War, Clegg is a Wanker’.
Also there were a series of large, hefty placards saying: ‘Negative Dialectics: Adorno’ (while on the
back) ‘Sentimental Education: Flaubert’. Others were, ‘One Dimensional Man: Marcuse’, ‘Down
and Out in London in Paris: George Orwell’, ‘Life against Death. N. O. Brown’. ‘Society of the
Spectacle’ Debord’ etc. For us one of these created the best incident of all. Not retiring intellectual
egg-heads some of this lot carrying them went right up front to the battle lines and a cop was
knocked off his horse by the ‘Negative Dialectics: Adorno’ placard (other protestors though were
helping in derailing the arsehole) to be whisked off to cop-hospital on the critically injured list. Some
distance away the placard on which was spelt out ‘The Society of the Spectacle : Debord’ was then
furiously mangled by another cop the remnants thrown on a protected grass verge fronting
Westminster Abbey! (This is all true and was witnessed by one of us).
Truth is the last few weeks has seen the biggest and most autonomous (well, on the way to getting
there) uprising of students (masked welfare proles in reality) the UK has ever seen and the art
students it seems are to the fore. Though most of the action (hardly critique) is about cuts in the art
and culture generally there’s a growing contingent beginning to point in the direction where the
transcendence of art lies. It’s shaping up to look like what bro’ and I did in 1968 WRIT LARGE;
admittedly more proletarianised today as there’s really no jobs / careers to be had at the end of the
line except for grovelling crawlers!


The above slogan was initially painted in very big letters on a wall in Paris in 1989. It was
conceived and executed by Patrick Cheval one of the original French situationists at the time
of the group’s dissolution in 1972. Though the slogan was removed by the usual officially
run anti- graffiti outfit, Jack de Montreuil (ex Os Cangaceiros) made it into a postcard.
Patrick Cheval is outstanding because he was one of the few bona fide situationists post
1968 who didn’t cop out (Neither did Sebastiani or Rene Reisel but there were others)
becoming a menial school caretaker. “Alas, alack poor Yorick”, Patrick was also an
uncontrollable alcoholic and a few short years after this slogan shone in brief brilliance, the
moonshine killed him. Before he died so youngggg Patrick wrote a book on fishes and fishing
which we hope to place on the RAP web once Jack de Montreuil fishes it out…..

First Greece then Paris now London in insurrection. I wish I could say beautiful things but I can`t

You can have my brain when you take it from my cold dead hands.

Negative dialectics. Adorno (on the back - Sentimental Education. Flaubert
One Dimensional Man. Marcuse

Down and out in London and Paris.Orwell

The university is a factory, Strike Occupation.

Tories put the `n` in cuts

I wish my boyfriend was as dirty as the police

An arts for arts sake strike

Art against the cuts

Save money eat the poor

This is not a placard

A tax on the rich not attacks on the poor

Don`t make us pay for what the W/Bankers did

Smile you are now on a data base

We are doing it for estate kids
Posted by theory and action: words for an anarchist debate at 17:53