GAZA YOUTH BREAKS OUT MANIFESTO... SOMETHING NEW IS WAKING UP IN GAZA?... 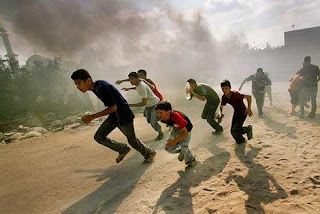 Fuck Israel. Fuck Hamas. Fuck Fatah. Fuck UN. Fuck UNWRA. Fuck USA! We, the youth in Gaza, are so fed up with Israel, Hamas, Fatah, the occupation, the violations of human rights and the indifference of the international community! We want to scream and break this wall of silence, injustice and indifference like the Israeli F16’s breaking the wall of sound; scream with all the power in our souls in order to release this immense frustration that consumes us because of this fucking situation we live in; we are like lice between two nails living a nightmare inside a nightmare, no room for hope, no space for freedom. We are sick of being caught in this political struggle; sick of coal dark nights with airplanes circling above our homes; sick of innocent farmers getting shot in the buffer zone because they are taking care of their lands; sick of bearded guys walking around with their guns abusing their power, beating up or incarcerating young people demonstrating for what they believe in; sick of the wall of shame that separates us from the rest of our country and keeps us imprisoned in a stamp-sized piece of land; sick of being portrayed as terrorists, homemade fanatics with explosives in our pockets and evil in our eyes; sick of the indifference we meet from the international community, the so-called experts in expressing concerns and drafting resolutions but cowards in enforcing anything they agree on; we are sick and tired of living a shitty life, being kept in jail by Israel, beaten up by Hamas and completely ignored by the rest of the world.

There is a revolution growing inside of us, an immense dissatisfaction and frustration that will destroy us unless we find a way of canalizing this energy into something that can challenge the status quo and give us some kind of hope. The final drop that made our hearts tremble with frustration and hopelessness happened 30th November, when Hamas’ officers came to Sharek Youth Forum, a leading youth organization (www.sharek.ps) with their guns, lies and aggressiveness, throwing everybody outside, incarcerating some and prohibiting Sharek from working. A few days later, demonstrators in front of Sharek were beaten and some incarcerated. We are really living a nightmare inside a nightmare. It is difficult to find words for the pressure we are under. We barely survived the Operation Cast Lead, where Israel very effectively bombed the shit out of us, destroying thousands of homes and even more lives and dreams. They did not get rid of Hamas, as they intended, but they sure scared us forever and distributed post traumatic stress syndrome to everybody, as there was nowhere to run.

We are youth with heavy hearts. We carry in ourselves a heaviness so immense that it makes it difficult to us to enjoy the sunset. How to enjoy it when dark clouds paint the horizon and bleak memories run past our eyes every time we close them? We smile in order to hide the pain. We laugh in order to forget the war. We hope in order not to commit suicide here and now. During the war we got the unmistakable feeling that Israel wanted to erase us from the face of the earth. During the last years Hamas has been doing all they can to control our thoughts, behaviour and aspirations. We are a generation of young people used to face missiles, carrying what seems to be a impossible mission of living a normal and healthy life, and only barely tolerated by a massive organization that has spread in our society as a malicious cancer disease, causing mayhem and effectively killing all living cells, thoughts and dreams on its way as well as paralyzing people with its terror regime. Not to mention the prison we live in, a prison sustained by a so-called democratic country.

History is repeating itself in its most cruel way and nobody seems to care. We are scared. Here in Gaza we are scared of being incarcerated, interrogated, hit, tortured, bombed, killed. We are afraid of living, because every single step we take has to be considered and well-thought, there are limitations everywhere, we cannot move as we want, say what we want, do what we want, sometimes we even cant think what we want because the occupation has occupied our brains and hearts so terrible that it hurts and it makes us want to shed endless tears of frustration and rage!

We do not want to hate, we do not want to feel all of this feelings, we do not want to be victims anymore. ENOUGH! Enough pain, enough tears, enough suffering, enough control, limitations, unjust justifications, terror, torture, excuses, bombings, sleepless nights, dead civilians, black memories, bleak future, heart aching present, disturbed politics, fanatic politicians, religious bullshit, enough incarceration! WE SAY STOP! This is not the future we want!

We want three things. We want to be free. We want to be able to live a normal life. We want peace. Is that too much to ask? We are a peace movement consistent of young people in Gaza and supporters elsewhere that will not rest until the truth about Gaza is known by everybody in this whole world and in such a degree that no more silent consent or loud indifference will be accepted.

This is the Gazan youth’s manifesto for change!

We will start by destroying the occupation that surrounds ourselves, we will break free from this mental incarceration and regain our dignity and self respect. We will carry our heads high even though we will face resistance. We will work day and night in order to change these miserable conditions we are living under. We will build dreams where we meet walls.

We only hope that you – yes, you reading this statement right now! – can support us. In order to find out how, please write on our wall or contact us directly: freegazayouth[at]hotmail.com

If you want to help, here are some ways for now:

1. Promoting our manifesto by sharing it
2. Sending an email to your friends asking them to join us in our different social accounts (Facebook, Twitter)
3. Translating the manifesto to your language and sending it to us
4. Sending the manifesto to journalists in your country
5. Making organizations in your countries that are concerned with the Palestinian issue and/or youth rights know about our existence
6. Posting links about violation of youth’s rights in Gaza on our wall
7. Planning an event in your country about this issue and/or organizing for a skype conference, where we are able to talk with a group of youth, politicians or others outside Gaza
8. Suggesting us ideas for reaching out to a greater number of people

GYBO (GAZA YOUTH BREAKS OUT)
Posted by theory and action: words for an anarchist debate at 17:44