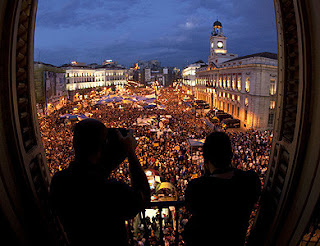 Poor, reformist and not realistic.


Given the rapid deterioration of the multidimensional crisis we are experiencing, it is entirely understandable and desirable that there is a growing number of people who want to publicly and collectively express their opposition to the destructive path society is taking as well as their refusal to the political farce, economic impoverishment and social injustice. We therefore think that participation in events such as "Real Democracy Now" is better than remaining in political apathy and passivity in the current situation.
However, we also think that spending energy in supporting this kind of mobilization is worse than do so in building a new kind of movement, based in historical reflection, strategically articulated and endowed with true radical power for transformation; allowing us to leave behind the oligarchic and eco-destructive current system as well as the heteronomous and individualistic mentality that prevails these days. All this to be done by creating a new form of social organization genuinely democratic and truly ecological as well as an autonomous and cooperative mindset.
As we argue below, the demonstration of 15-M and the events that followed it can not give rise to a movement of this kind and can not even be an integral part of it, since neither its aims nor its strategy are aimed at such a purpose.
Beyond the whole phraseology of the “Manifesto for a real democracy” which, it must be said, is very ambiguous, vague and naive, the platform that runs this movement has made a number of concrete proposals that could be considered the core "program" behind the call.
These are basically a set of measures (to increase control over professional politicians and tax havens, raise taxes for banks and big fortunes, to increase the recruitment of health workers and teachers, to establish the obligation to hold referendums on important political decisions to provide economic assistance to the unemployed and all low-income people, to make deal of work based on the reduction of working hours, etc..) that we consider inadequate and / or utopian for the following reasons:

a) These proposals are insufficient for its reformist character, since at no time they challenge or try to replace the current fundamental institutions of the present system, namely the "democratic" representative state and the capitalist market economy, but merely claim some improvements . However, the widespread and multidimensional crisis we are experiencing today is not due to malfunctioning of these institutions but to their own idiosyncrasies. The dynamics inherent to free market economy and the "representative" state give rise to a huge and growing concentration of power that can not be reversed through simple cosmetic changes.
Thus, assuming that a tenacious and hard popular struggle succeeded in implementing some of the suggested reforms, they could not do anything but to slightly slow down the progress of the ongoing multidimensional crisis as they would be inevitably compatible with the actual functioning and dynamics of the present system. Hence such reforms would be quite ridiculous compared to the strong development of the multidimensional crisis caused by this system.
We therefore believe that it is inappropriate to advocate for social injustice, the vast economic inequality and political usurpation to be just given a new coat//veneer of "democratic" make-up and / or "ethics". Instead it is clearly necessary to go straight for the abolition of the current system, primary cause of the adverse effects and perverse behaviours we suffer now a days. In order to do this a new truly democratic system in all areas of live must be given birth.

b) All the proposals are utopian not only because, as usual in this type of approach, no clear and realistic idea of ​​how these measures could be imposed on the ruling elites who have the upper hand has been put forward, but mostly because they completely ignore that these measures radically violate the logic and dynamics of the current system. The energy that feeds the latter is economic growth and commodification, so the states and businesses all over the world seek to maximize their rate of GDP growth and profit figures respectively. A state or a company that does not follow this logic of pursuing economic growth through increased competitiveness / efficiency, rapidly enter the path of the crisis and dissolution.
Knowing this, governments worldwide are struggling to pass laws and reforms aimed at increasing the competitiveness of the country, which means, obviously, greater exploitation of its human and natural resources, and therefore, greater job insecurity, social insecurity, psychological distress and environmental destruction.
Today, in addition, both states and companies worldwide are finding it increasingly difficult to continue to increase their GDP and profit figures and therefore are trying to compete at all costs, ie, cutting, impoverishing and rapidly destroying the lives of the vast majority of the population.
We can not close our eyes to this core feature of our times: there is an irreconcilable conflict growing between the needs of people and the planet, on the one hand, and the needs of the economic system, on the other and this conflict can only be solved with a winner: Either human and natural needs win, resulting in a system geared to meeting the democratic satisfaction of these, or the needs of state and capitalist system now established win, which is to say, their dynamics based on the senseless pursuit of unlimited economic growth and the steady increase in the concentration of power. Any proposals that overlook this fundamental and unavoidable conflict are both utopian and tomfoolery.
Moreover, as evidenced by their statements, the conveners of this mobilization platform become an accomplice to the distortion and misrepresentation of the word democracy when they suggest that what makes modern society non-democratic is only the corruption and uncontrolled power of financial corporations and transnational business.
In truth, it is not just that what makes all of us live in an oligarchic society, but also the existence of the state plays an important role on it. This meaning a centralized and bureaucratic apparatus separated from the public and in a dominant position over this. The state calls itself "democratic" to try to legitimize itself, obviously not to be an institution that actually confers real power to people to decide on the affairs of the public sphere. It is completely wrong, therefore, to attribute the lack of democracy only to political corruption and the domination of the economic powers on the “public” authorities: the very essence of "democratic" representative state is deeply oligarchical in its very essence. In order to really claim a true democracy we must fight for the abolition of this institution and its replacement by a new system of democratically run communities through public popular assemblies/councils/meetings, confederated through responsible and revocable delegates.
In conclusion, we believe that the inadequacy and utopian proposals of the platform that calls for the manifestation of "Real Democracy Now" as well as its implicit collusion with the distortion of the meaning of the term "democracy", makes this call, in the best case scenario, a space-time that, like many others, may be useful to show and express the rejection by many people to the general crisis of the contemporary world and, in the worst case, a tomfoolery aimed at channelling the honest will for change of many people towards almost always illusory and always insufficient goals.