TUNISIA AND ALGERIA... NO EXCUSES FOR OUR LACK OF SUPPORT!! 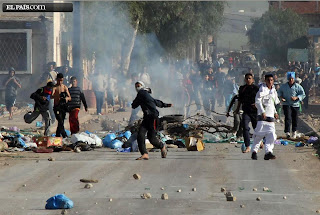 Algeria and Tunisia have been going through an insurrection of epic dimensions for more than one week due to the worsening of the economical situation and its impact in the live of millions of people from the lower social strata. In Tunisia the immolation of a fruit vendor in the city of Sidi Bouzid (he literally set himself on fire) was the spark that ignited a whole wave of fresh demos, rioting and brutal police repression with apparently more than 20 people murdered by the bastards in uniform. The rising in the prices of food and other basic goods as well as lack of freedom and rampant unemployment have also caused the riots to expand to the neighbouring country of Algeria.


What really surprises me is that none or at least very few fellow anarchist bloggers (at least among those I check nearly in a daily basis) seem to have bothered in posting something about events of such a magnitude. Neither any action has been planned or carried out in support of the workers, youth and common people bravely fighting their own exploiters and states in the streets of Algiers, Sidi Bouzid, Tunis, and others...

What is going on here?... could it be that the reputation of these 2 countries as "Islamic fundamentalist" dens make anything that may happen in them automatically uninteresting to our ethnocentric westernised mentalities?... can we see that Islamic fundamentalism may well be one of the many ways in which the local elites keep their people alienated and appeased to an extent and that this kind of control could possibly be starting to fade?. Are all Muslims "fundamentalists", "potential terrorists", could they also be rebellious and bear a wish for freedom and anarchy as apparently some grassroot Christians do?... is everything that happen in the territories within the sphere of influence of Islam inevitably biased by religious issues?...Have we already forgotten that the southern bereber region of Algeria (the Kabilia)saw during the whole year of 2001 one of the most inspiring examples of insurrection, anti-police feeling and anti-state self-organisation of the whole decade?...

As far as I can see we are talking about common people whose everyday struggle for sheer survival is meant to worsen to levels we could barely imagine in our "still not that bad" European continent... The fact that so many people literally run to any demonstration in support to the Palestinian struggle while no one seems to give a shit about the Algerian and Tunisian insurrections (comparable at all levels to the Greek riots after the murder of Alexandros Grigoropoulos and bearing so far a much higher death toll) strikes me as an utterly disgusting omission if not a pure and simple act of revolting hypocrisy.

Anarchist or not, those people are showing dignity, solidarity with each other,bravery and political consciousness and just for that we should support them in the same way we do with other comrades from different parts of the world. We should begin to build bridges and try to communicate (face to face if possible) with people from different cultural backgrounds and realities regardless the way in which they may be depicted or stereotyped by the mainstream media. Perhaps those about whom we know nothing today turn into the comrades of tomorrow.

And just to finish let me make a humble suggestion. A demo in support for those comrades in the Thessaloniki trial has been called for the 14 of January at 14:00 h in front of the Greek Embassy in London. For those who might not know this, the Algerian Embassy is also located in the Holland Park area (54, Holland Park), that is relatively close to the Greek one. Why not walking to this other embassy as well a little bit later with a banner or something?. Why not trying to increase the scope of our international solidarity by also rallying to the Tunisian embassy, located in Knightsbridge, close to the Albert Memorial (29 Princes Gate)?. Actually the 3 embassies are relatively close to each other so distance or transport is not a problem. See map here:

I am sure that the people literally fighting for their lives in Tunisia and Algeria would welcome any act of support, any action that could make them see that they are not alone and someone knows what is happening beyond the borders of their countries.

They deserve this and more... the same as we would if we found ourselves in a similar situation.
Posted by theory and action: words for an anarchist debate at 18:59